Update on Nova Scotia – almost, but not quite recovered

John Clinkard John Clinkard has over 35 years’ experience as an economist in international, national and regional research and analysis with leading financial institutions and media outlets in Canada.

‘Almost but not quite’ is the best way to describe how close the Nova Scotia economy is to a full recovery from the coronavirus health crisis and from the impacts of the COVID-induced recession. According to the provincial government’s COVID-19 Dashboard, after hitting a high of 142 last November, the number of COVID cases in the province has trended steadily lower and now (March 19) stands at just 17, the secondlowest level in the country. From an economic perspective, the indicators which best capture the extent to which the province has recovered are the province’s latest (February) jobs numbers. Over the past 12 months, Nova Scotia has clawed back more of the jobs it lost as a result of lockdowns to limit the spread of COVID than any other province. Hiring has increased in eight of the province’s 17 major industrial sectors largely due to gains in professional, scientific, and technical services; education services; finance insurance and real estate; and transportation and warehousing. Although the number of public sector jobs is up by +7.3% over the past year, total employment in the private sector has yet to fully recover and is still down -3.5% from a year ago. However, the outlook for private sector employment did brighten recently after the provincial premiers of the four Atlantic provinces agreed to open the Atlantic ‘bubble’ effective April 19. Nova Scotia’s exports have also exhibited a significant recovery over the past eight months. After being down by -42.4% y/y in May 2020, they have gradually trended higher driven primarily by stronger foreign sales of lumber, paper, and seafood, the bulk of which has been shipped to the United States, the market for 63% of the province’s total foreign sales. The main reason the province’s exports have not exhibited a stronger recovery is a sharp (-39% y/y) drop in exports to China. Looking forward, stronger U.S. growth, fueled by the recently approved $1.9 trillion fiscal stimulus package, will undoubtedly have a positive impact on the province’s exports through the remainder of this year and into 2022. The phrase ‘almost but not quite recovered’ understates the current health of Nova Scotia’s housing market. Fueled by near-record-low mortgage rates, the above-noted strong growth of employment, and despite a very sharp drop in net international migration that has been partially offset by a record net inflow of migrants from other provinces, sales of existing homes over the past six months are up by +40% compared to the same period a year earlier. Reflecting this surge in demand, average sale prices were up by +28.9% y/y in February, a thirtyyear high. At the same time, the months’ supply of homes for sale has fallen to a record low of 1.8, which reflects a severe shortage of existing homes for sale. Not surprisingly, the unprecedented increase in demand for existing homes and a shrinkage in the volume of newly completed and unoccupied dwellings has contributed to a solid gain in new residential construction. Over the past six months, housing starts in the province are up by +22% versus the same period a year earlier. Going forward, the persisting impact of low-interest rates, a pickup in net international migration, sustained strong net interprovincial migration and solid jobs growth should cause starts for the year to increase from 4,900 units in 2020 to 6,000-to-6,500 this year and 4,200-to-4,600 in 2022. That said, the very strong growth in sales of existing single-family dwellings relative to a much more modest rise in single-family starts suggests house prices in the province will remain under pressure well into the second half of 2021. Despite the headwind of COVID lockdowns and the downbeat projections of most analysts, nonresidential construction in Nova Scotia posted a gain of +2.0% last year, second only to British Columbia. Nova Scotia’s 2020 increase followed back-toback declines in 2018 and 2019. The 2020 climb was driven by spending on public sector projects including health care facilities; schools; and roads and bridges. Major projects included the QEII New Generation Health Care Project and the Cape Breton Regional Health Care Redevelopment Project. Going forward, nonresidential construction will continue to be supported by the Halifax Shipyard Contract to build combat and coast guard vessels and by the Halifax Airport Capital project. It might also receive significant boosts from the Goldboro LNG Liquefied Natural Gas Export Facility and, potentially, from the Bear Paw Liquefied Natural Gas Project. The solid pattern of job growth, the imminent re-opening of the Atlantic ‘bubble’, persisting low-interest rates and a sharp rebound in business confidence, as indicated by the CFIB Business Barometer, collectively reinforce the prospect that after contracting by an estimated -4.0% in 2020, the Nova Scotia economy will expand by +4.5% to +5.5% this year and by +3.0% to +4.0% in 2022. 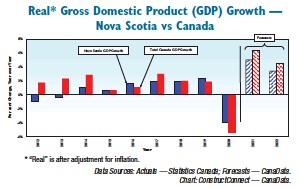